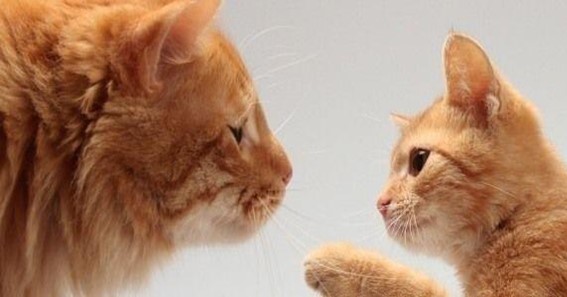 Cats exchange messages even when they are silent. They live in a world of visual and olfactory cues and sound is only part of their range of communication tools. As surprising as it may seem, it seems that cats only developed meows and purrs to communicate with humans, and not with their fellow-creatures. A study of feral cats showed that they mewed and purred much less often when there were no humans around.  These specific cat-human communication modes prove that the two species have been evolving together for a very long time, even thousands of years!

Cats use a quick meow to greet their fellow cats. This type of meow is also emitted by the mother to call her kittens. They also produce chirps when watching or stalking potential prey. The ” meow! ” plaintive and interminable is exclusively reserved for us! They use it to get our attention and encourage us to interact with them.

Cats are solitary in nature. They growl and mew to indicate that their fellows are in their territory and that they must retreat. In extreme cases, you may hear a howl, the result of the meeting between two tomcats in the street. Females produce high-pitched growls.  Spitting is a common sign of anger or anxiety. It sometimes turns into screams and usually results in an attack. Cats also scream when in physical distress.

On a daily basis, cats express themselves more with their bodies than with their vocal cords. A cat’s tail functions like a flag attached to a pole. If it is trained, the cat is relaxed and will be nice. Cats often curl the tip of their tail forward when approaching a cat they like. If the tail wags along its entire length, the cat is undecided. On the other hand, if it rocks gently back and forth, your pet is relaxed.

If your cat bobs its tail back and forth, it’s either curious or chasing prey. It can also indicate the beginning of a temper tantrum.

It is when his tail stands on end and the hairs on his body stand up as if he has received an electric shock that the cat is most stressed. He feels threatened and sets up this defense technique to look bigger and repel other cats, dogs, or anything that scares him.

If a cat is not entirely sure of the signals it receives from its peers, and therefore feels a little indecisive and uneasy, it will squat with its tail tucked on the side. He will stay in this position while he assesses the situation. In the end, he may decide that discretion is the best proof of courage and take his paws around his neck!  A relaxed, submissive cat will roll around on the floor and show its belly to other cats. This signal is also very common in dogs.

Cats also express their emotions through their eyes. A frank and sustained gaze means that the cat is focused on danger or prey or that it has not yet decided whether it is in a fight or flight situation.  A slow wink is both a sign of affection and affection is when he feels threatened or frightened.  Flattened ears are usually a sign of uncertainty or anger. A happy cat has relaxed ears. They rear up when he focuses on a toy, sound, or prey.  When cats groom each other, touch their muzzles, and chew each other gently and gently, they are liking each other.

Smells are important to cats. They deposit pheromones on their territory, both in the house and outside, by rubbing their glands on objects or furniture. These glands are located on the cheeks of the cat, which explains why he likes to rub his head against your leg. Of course, you can take this as a sign of affection, but it’s mostly a way for him to spread his pheromone-filled messages. Cats also have glands where the tail joins the body, but you probably wouldn’t like it to rub that part of its body on your leg…!

Males tend to spray urine all over their territory. This is usually done outside, fortunately, but a strange cat that breaks into your home is likely to urinate inside. Castration often eliminates this macho and dictatorial behavior.  Most of these means of communication are tied to the fact that

Learn to interpret your pet’s voice and body language and you’ll soon be mastering “cat talk” to some extent!

The language of the cat is mainly non-verbal: in fact, the posture, the dilation of the pupil, the positioning of the ears, and that of the tail reveal the feelings of the animal. Relaxed cats, for example, have a thin elliptical pupil and a vertical tail, sometimes slightly curved at the tip. Defenders, on the other hand, pull their ears back, lower their tails, and fluff their hair.

We must also pay attention to the gaze, which remains fixed only against the opponents. In fact, friendly subjects tend to open their eyelids halfway, thus communicating trust and lack of hostility. Cyclically, female cats express sexual availability by rolling on the floor; this behavior is however observable even in male cats, particularly submissive,

One of the methods Cats Communication can use to express happiness while ensuring the happiness of others, including using scent. These are real scents, emitted by specialized glands throughout the body that produce pheromones. These substances serve a dual function: to mark anything familiar to enhance the animal’s sense of security and to signal potential competitors. For this reason, it’s not uncommon to see cats rubbing their cheeks in groups: this behavior actually indicates that members belong to a group.

To Know Some Great Stuff Do Visit QuerClubs

To Know Some Great Stuff Do Visit QueryPlex

To Know Some Great Stuff Do Visit SarkariXam